My main platform at the Vallejo Times-Herald and affords me the farthest reach as far as audience. I’m fortunate to have some great colleagues, but I also get to talk to some talented coaches and High School athletes with great stories to tell.

The closest I’ve ever gotten to the field are those days I cover games, but that doesn’t mean I haven’t learned some lessons from sports figures that can’t be applied to my writing life. I’ve never met John Wooden before but I’ve read every book and article there is about the legendary coach from UCLA. Wooden died in 2010, but  but he remains an influential figure to me. The one thing I take away from his life and teachings is that it’s everybody’s responsibility to use their skills to teach others and also to be taught themselves.

Mentor is both a noun and a verb. As a noun, it’s someone whose principles and values have dictated their decisions and actions as they went about their lives. As a verb, it’s being open to teaching others through actions and receptivity to teaching those that seek guidance. By that definition, all of us are mentors and all of us can be mentored.

It’s a simple matter of being observant enough to see the lessons that be gleaned, but also it’s being aware that the way we conduct ourselves has an impact on those around us.

My talents lay in journalism and in writing. The real beauty of my profession is that it affords me the ability to ask questions and learn about people on a daily basis. My job is to tell stories both imaginary and real and this blog is my platform to tell the stories about all the wonderful Creatives I meet on a daily basis.

I’m going to make it a point to profile at least one person on this blog each week. My hope is that you see each one of these stories as an opportunity to be mentored because every person that has taken the time to speak with me has certainly been my mentor.

“My dad was a big fan of Zelda. He’d be playing Zelda and then call me over. I’d run up whenever he’d be fighting the boss,” Melissa said. “ I remember watching X-Men, Gargoyles, and Sailor Moon. I think that’s when I started caring about anime. I used to scour the TV guide a lot (for anime), watch Sci-Fi channel. Robot Carnival and weird Sci-Fi. I played a lot of RPG’s.”

Melissa is an artist from Sacramento whose art is influenced by cartoons and video games. That love for colorful characters from her childhood carried over into high school, college and now into a career as an artist.

Melissa got her Bachelors degree in Fine Arts at Cal-State University Chico in 2007. She said her main influence was a Nanette Wylde, a teacher in Digital Media at the school.

“It just sort of happened in my life,” Melissa said. “I kept making friends with musicians and other band would see my work.”

Currently she works part-time as a desktop publisher, “playing with design software and updating English files into different languages for publications” as she puts it, but her goal is to work full-time as an artist.

“Work the last couple of months has been pretty tough and I find myself up in the wee hours,” Melissa said. “Various project for my day job can be unpredictable, but I take it one day at a time. Work is 24-7 sometimes.”

Between her day job Melissa carves out time to do the things that she loves. Recently Melissa had a booth at the Animation on Display Festival where she handed out business cards and hada portfolio of past work she’d done for clients. Her commissioned work ranges from $15 for sketches to hundreds of dollars for a full color work

She said that it can be challenging at times, but takes a positive approach and sees it as a way of stepping out of her own element.

“I’m still navigating art world, figuring out how to put myself out there. Mainly it’s just my day job that gets in the way. I want to do art all the time; that’s what I wish I was doing. It’s finding ways to balance work and art. ” Melissa said. “I’m learning that if your serious about art, and you want to do it professionally, then you have to make it your lifestyle.”

Melissa uses both traditional and digital mediums to produce her work. Initial sketches are done on sketch pads then transferred using Photoshop or Painter. She said at times she’ll use mixed media or acrylic paints.

One constant is the dreamlike quality that pervades most of ther pieces. On the surface are foreground characters, but the beauty in all her work is the subtlety where shadowy figures often tell their own story in the background. 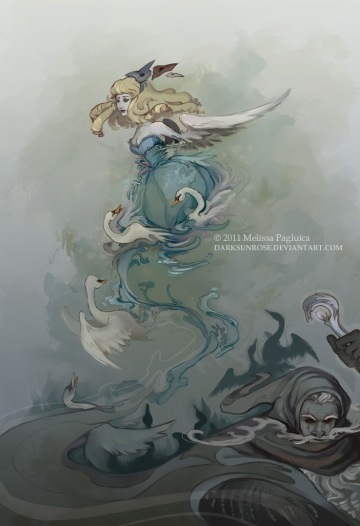 “I like working with ideas that people can recognize and associate with easily. Swan Lake is well known for the scene where the Princess becomes a Swan and I wanted to try putting my own spin on this transformation. Stories are important to me, so I always try to portray a point of view that looks like a story is unfolding within my art.” 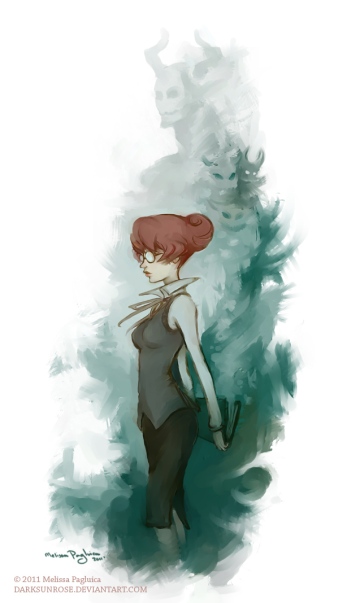 “Gwen Turner is from a story that I’ve been working on for a awhile. She’s a librarian, the non-adventuring nose stuck in a book type, who gets sucked into a dark underworld of demons.”

“When I do fanart, it has to be nostalgic for me. Utena was one of those animes I watched growing up. I wont pretend to fully understand Utena, but it was fun trying to portray the relationship and pulling symbols I remember from the series within the background.”